I missed a perfect, unassisted, NYT crossword by two incorrect letters. I think that's as close as I have ever come to beating the word beast. I will press on to the summit where the air is thin and words hard to come by. 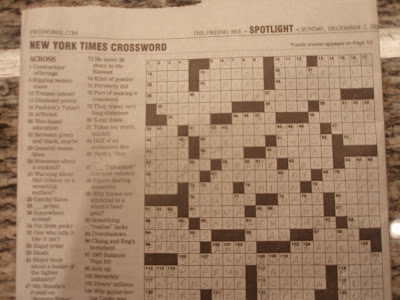 We saw Evita last night. I wasn't sure what to expect, interest wise, but because of the quality of the cast and their voices it was riveting. It was probably one of the top three shows we have seen as far as the voices are concerned from the leads to the ensemble. It's an odd show as far as the lack of applause breaks and Eva is dead as the show opens and they then reconstruct her rise to power and then she is dead as the show closes. We were saying how cool it would be if someday we could see Joe come through with a show. 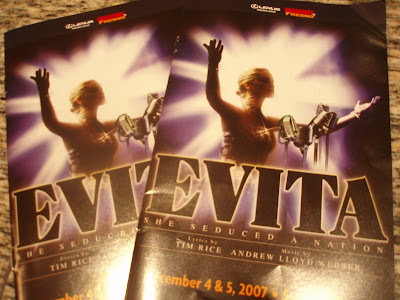 We have become good friends with these ladies that have sat behind us for many years, Gladys, Virginia and Mary. They are the nicest people and we have such a good time with them. I'm afraid this may be the last year that they get their seats as it is getting harder for them to get around. We have been sitting with the same people around us for so many years that we have seen their children grow up and get married or move away. It doesn't seem possible we've been going there that long.

Posted by Happynhanford at 7:52 AM

Congratulations on what I consider to be a crossword victory! I have never gotten that close on the Times. Occasionally I finish an Onion. I did however, finish both an AM NY crossword AND a 2 star Sudoku while stuck on the Q train on the Manhattan bridge for 45 minutes the other night. But compared to the Times, AM NY is child's play.

evita is possibly meg's favorite musical. we saw a very good production a few years back in san diego. the timeshifting is an acquired taste. glad you enjoyed it. way to go on the puzzle. i have hit a wall at about 66% that i cannot break.