Marlene had no more than gotten back from Denver when she started talking about getting me out of the heat and to the coast. I didn't need a pair of xray glasses from the back of a comic book to see through that one. I suggested Thurs. so we could go to one of our favorite places, the SLO farmers market. We started up in Cambria at Moonstone beach. There was a Canadian guy and his daughter, eh, looking for moonstones. He pulled some out of his pocket and wondered if he had any. He had two pieces of sea glass, a couple of rocks and two guitar picks. Those Canuks might be easy marks, eh. I showed him what to look for and found a good one and gave it to him later. There were some great tide pools a ways down the beach. 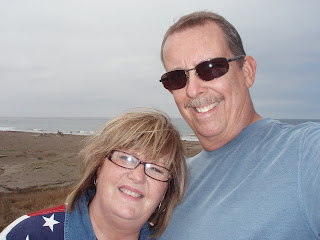 We walked around Cambria for a little bit and headed to Cayucos to see my cousins house that she is having remodeled. It looks beautiful. Headed further down the coast to Moro Bay. We met up with Lu Chi Fa who owns the Coffee Pot restaurant on the waterfront. Marlene and he are great friends and he has told his life story at her school a few times. You can read his story in the book Double Luck. We walked the embarcadero, sat and read the paper and listened to a sea lion make noise below us. Drove up to a look out point above the golf course and took a nap. Started south through Los Osos and on to Avila Beach and Port San Luis where we sat on the beach and got sunburned. 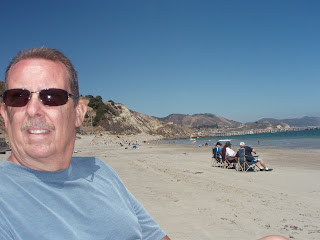 Left Port San Luis and got to San Luis Obispo. Went to the Apple Farm just to look around after a many year absence. As you can see I nearly became the first water wheel fatality. Don't worry I was all done with trick photography. 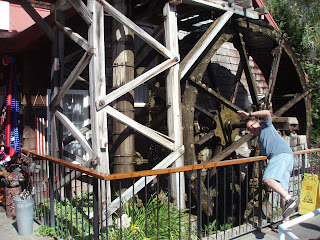 It was time to go downtown and find a parking place and spy out the food vendors. You never know what you will see at the SLO farmers market. Here is a perfect example.....people with letter shirts spelling out "Readinginpublic.com". They moved just as I got there to take their picture. They were all reading in public. 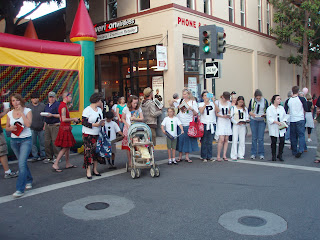 Just a little self portrait. 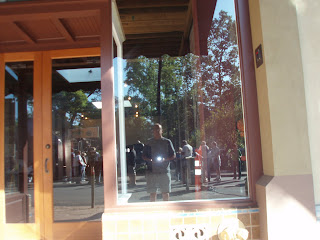 What would a shoe sale be without a Marlene to at least look. That's her in the window, unfortunately because of the glare, she is 40% off. 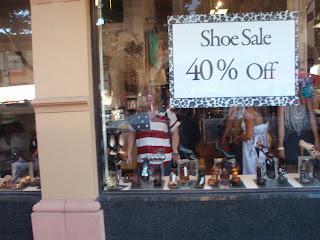 Now were getting to the meat of the blog, not to mention the beans and rice. She always gets a giant burrito from the same wagon. I can't even give her that look of satisfaction. 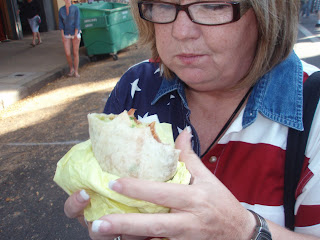 These were four cute girls giving out compliments. Unfortunately when they came to me they struggled. I left no poorer but somewhat hurt. 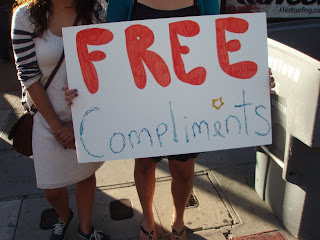 Something for the NYC contingent.....a falafel! It was delicious. The tahini had a kick to it but it was so good. Given I'm not the neatest eater in the world and I was sitting on a curb, I wore some of it for the rest of the trip. Later I got a chicken shish kabob and veggie chow mein at my favorite Chinese stand. 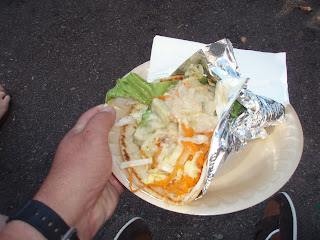 This guy has been spreading the good news at the farmers market for as long as we have been going. His message has mellowed some what over the fire and brimstone he used to proclaim. There was a nut in a wheelchair next to him yelling at the crowd that they were all going to hell, no Dale Carnegie he. I sometimes wonder if that doesn't fall under the catagory of using God's name in vain. 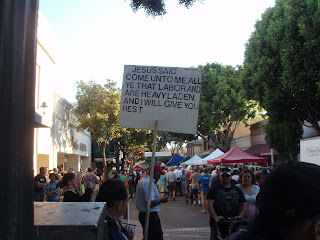 OK, it's just before six when they can start selling and this is the line for McClintoc's. It stretches for about a block and doesn't go down for some time. I can't believe that their BBQ is that much better than all the other places but I guess a few hundred people think so. 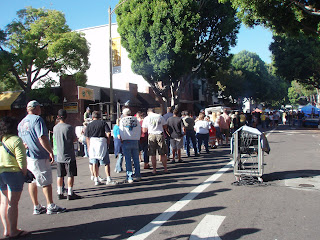 This is the business end of the line. They really have it down to a science and they are very entertaining as well. They started with a rendition of God Bless America. 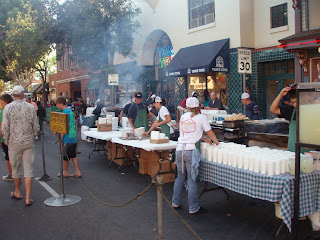 This is not where I got my falafel but they had just about anything a New Yorker would want. 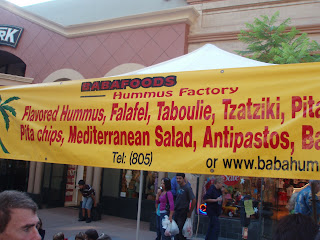 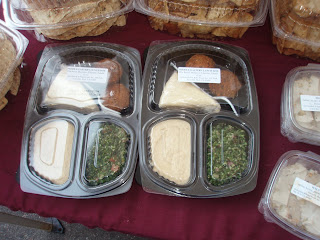 Hummus row, any flavor you can think of and more. Free samples 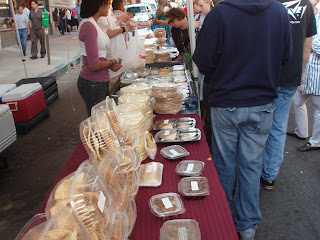 The array of flowers, fruit and vegetables is amazing. 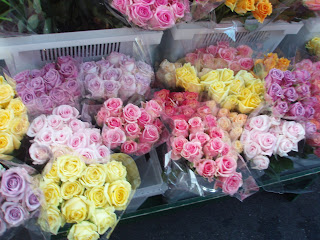 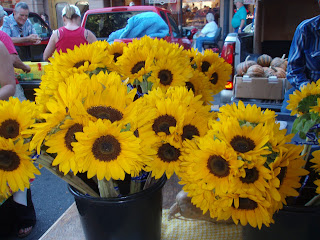 This is the onion girl. 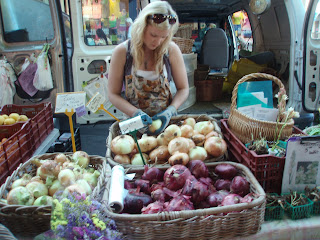 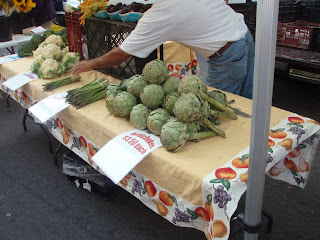 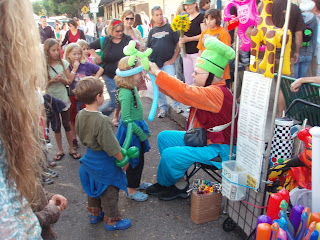 This guy sits here and asks you Bible questions to win candy. We did pretty well and had a good time talking to him. 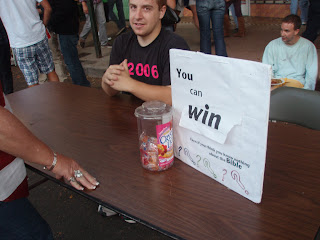 Finally what would any blog be without an homage' to Bee. Marlene saw this at the Apple Farm. 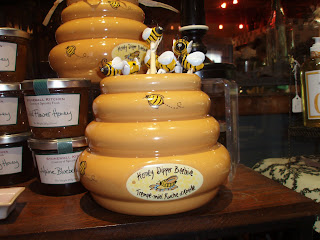 And closing with just a reminder of what the parents of that cute little girl, who think they can control everything now, are going to face soon enough. 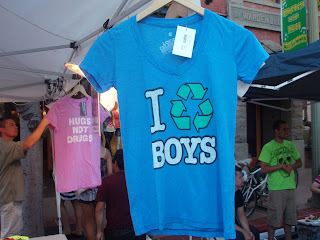 Posted by Happynhanford at 2:08 PM

Great blog! You really captured the goings on with gusto! Is that cheese or carrot shavings on your falafel? Either one seems strange to me, though cheese would probably be stranger.

I don't see anything wrong with Bee accepting Hugs instead of drugs... oh, the other one. Yes, that's quite troubling. Can you build us a teenager sized crib?

that was a great blog. informative, humorous, well photographed. the 40% off mom was awesome. glad you had a nice time.

I don't remember exactly, but it must have been carrots. Cali style.